Satsang is a compound Sanskrit word that means “keeping the company of the Self.” The Self, Awareness, is the true nature of everyone and one keeps company with it by continually meditating on it in many ways. One of the most effective methods involves discussing non-dual teachings with someone who has realized his or her identity as the Self, to get clarity with reference to Self inquiry. The satsangs posted here are the questions of many people around the world who are interested in enlightenment and find that Vedanta is their preferred means of Self knowledge. Since I am a teacher of Vedanta, a time tested means of self inquiry, I am qualified to reply to these questions.
~James Swartz
﻿
Login

You Can’t Be Detached

Dream State and Waking State Are Different Orders of Reality

Isvara Is the Boss

Susan: Vedanta feels like second nature and is a perfect fit for this mind; self-realisation came easily. I have followed the instructions for self-inquiry at the website, read James’ books and many of the e-satsangs. I read your eight stages to self-inquiry detailing what self-inquiry entails. I have heard so much about the “post”-enlightenment stage of self-inquiry; I would like to better understand what nididhyasana entails. 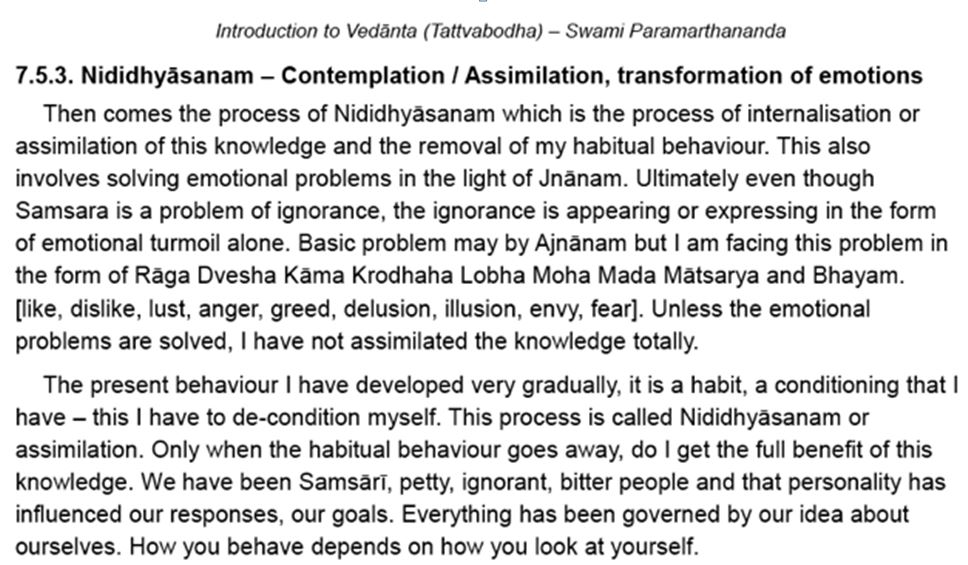 Self-actualisation, living the knowledge as a free jiva, is quite another matter from self-realisation, which is the experiential realisation of awareness. James says slow and steady wins the race. What often happens with very intelligent minds capable of grasping things quickly is the ego co-opts the knowledge, believing unconsciously that it is somehow “special,” which keeps the mind stuck and limited. We call this enlightenment sickness, and it is common. The ego can survive moksa and when this happens it is always a case of ignorance in some form still present in the mind, usually in the form of deeply rooted and unconscious patterns of behaviour (samskaras or pratibandikas). These have to be seen, understood and dissolved in the light of self-knowledge or they will cloud (tamas) and/or extrovert (rajas) the mind, making true freedom and peace of mind impossible. A mind that “get’s it” very quickly may not have mastered all the qualifications for moksa to obtain permanently in the mind; thus although self-knowledge is present, it is not firm. Such a mind has to go back and requalify if liberation and not ego-aggrandizement is the goal. A humble mind dedicated to self-inquiry that carefully and steadfastly plods along, diligently subjecting the mind to the scripture and practicing nididhyasana, often “get’s there” sooner. Of course there is nowhere to get to, because you are already there and self-inquiry is not a journey. But the steps of “getting there” are the same as the qualities of being there. Self-knowledge has to translate into the life of the jiva at every stage of self-inquiry and “beyond” it.

Moksa, or non-dual vision, is complete and permanent understanding of how the field of existence operates – the forces that create it: the gunas (and how they govern the creation of all vasanas) and the natural laws that run it: samanya dharma (big picture/Isvara), visesa dharma (how the individual relates to big picture/Isvara) and svadharma (inborn nature and tendencies of individual). As Swami Paramarthananda says in the quote above, a jivanmukta by definition will have resolved all its conditioning through contemplation, assimilation of the knowledge and transformation of its habitual patterns (vasanas/samskaras/pratibandikas, i.e. its conditioning) through self-knowledge. Emotionality is replaced by discrimination and devotion to the truth. This is the essence of nididhyasana.

However, the fine print on the enlightenment certificate that many miss is that there really is no “post”- moksa stage for the jiva even though as awareness you are moksa and not the jiva. As Vedantins we never stop “working” on the jiva even though we do not censure it or expect it to change, as we understand its inborn nature. We unfailingly follow dharma, personal and universal, without question, not because we want to improve the jiva but only because we want to enjoy the priceless benefits of a peaceful mind.

While it is true that once self-knowledge has obtained in the mind there is a definite “shift” in how one sees life and relates to objects, it is also true that the nididhyasana stage never really ends for the jiva, because it is always changing and interacting with the field of existence, which is also always changing. The price of freedom for the jiva is eternal vigilance. Macrocosmic ignorance does not end when personal ignorance (avidya) ends and the jiva is always limited by maya (although no longer conditioned by it) even though its essence is known to be limitless awareness. If this were not true, the jiva would become Isvara “after” moksa – which clearly and irrefutably is not the case.

A common myth in the enlightenment game is that enlightenment is another object to obtain, and when it is the jiva will be different, better. It may or may not be. It will still have its Isvara-given character and tendencies; it will still be a pain in the ass to itself and others sometimes. It will still suffer the slings and arrows of outrageous fortune, feeling joy, pain, loss, grief as well as the constant bliss of self-knowledge.

When moksa has obtained in the mind, one may and usually does feel experiential bliss regularly, but one does not depend on it, because you know you are the bliss. The bliss of knowledge does not feel like anything. Experiential bliss is an object known to you and you are always blissful, whether or not experiential bliss is present. In fact you could be sick, in pain, half-dead, broke, jobless or stuck in a situation you do not enjoy but cannot change – and be totally blissful because who you are is not influenced by what is or is not going on in your environment. You feel blissful regardless of what is going on around you and in the mind.

The subjective reality never ends for the jivamukta and it can and often does still project its subjective reality (pratibasika) onto Isvara. It will always have its particular way of relating to Isvara which will be unique to its Isvara-given vasana filters. The difference will be that a jivanmukta knows when it is projecting, instantly dissolves the projection in the knowledge and so is instantly free of it. Thus it does not create any new karma. To quote Ramji, it keeps its karma “like a little dog on a very short leash, right in front of it.” No karmic drag, ever, no unfinished business or drama. Every moment of every day is complete. There is never another person involved in its interactions and transactions in the world of objects/experience. The jivanmukta knows in the moment that it is transacting only with itself because there is no “other.” There is only awareness.

There is ZERO tolerance for self-aggrandizement of any kind if moksa is what one is after. As soon as the ego takes credit the doer is back and so is limitation and bondage. Once the mind is purified of duality humility is its natural response to everything in its environment (Isvara) because it understands there is only itself, awareness. It no longer sees “otherness” as awareness, even though it observes the jiva still apparently experiencing it. Duality is understood and appreciated for what it is – enjoyed, even. But as it is not expected to deliver something it is incapable of doing, i.e. happiness, duality is never a problem for the jivanmukta. This takes so much pressure off the jiva because there is no need to make it conform to some silly “spiritual” ideal, as there is nothing to gain through objects – a particular identity or ideal being just objects. The jiva is known and loved for what it is: a reflection of the self in a mirror, which is also the self.

As the jiva is a product of the gunas, belongs to and is always subject to Isvara, the jiva is never going to be perfect. But as awareness you are free of the jiva, and you know it arises from and depends on you, not the other way around. Then life makes sense and it is possible to see beauty all the time, even when things are not pretty for the jiva.

For years I have happily and diligently responded to communications on the topic of Self realization. Since the publication of my book, “How to Attain Enlightenment”— currently in its third printing —and the success of this website, the volume of emails has increased considerably. Unfortunately, owing to a busy schedule of teaching and writing, I am no longer able to answer all the emails I receive in a timely fashion. However, my wife, who is also a teacher, and several well-qualified teachers we have endorsed are available to answer emails on my behalf. I encourage you to send them your questions.
— James Swartz
Contact Us